Hello to all those who chanced upon this article via googling for "mole removal Singapore" - you've come to the right place. I've had friends ask me to check on their moles - so I thought I'd write a little about it.

Personally, if I was really worried about a mole, I would go to a doctor who specialises in aesthetics and skin, as it takes years of accumulated experience for a doctor to confidently say "that's not a mole I'd be worried about" when someone's life is at stake.

Read on to learn more about moles and mole removal in this comprehensive guide!

Also read: Where is the best place for mole removal in Singapore?

How much does mole removal cost in Singapore?

The cost of mole removal largely depends on the size of your mole and the treatment type. The numbers below are an estimate of the prices for mole removal in Singapore.

Punch Excision (with or without microsurgery)

Related: Is mole removal at NSC cheaper than at a private clinic in Singapore?

What are the types of mole removal treatments available in Singapore? 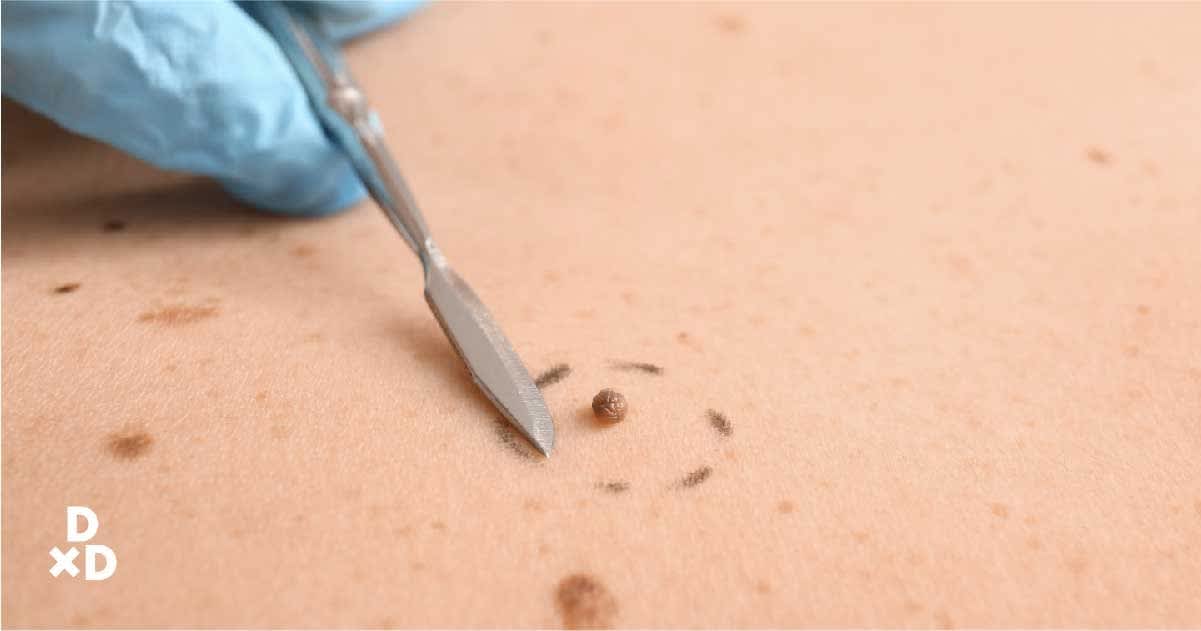 There are 2 main surgical options: shave and punch excision. Both of these surgical methods would leave scars after the healing process.

How to remove scar from mole removal?

What is the process for mole removal in Singapore?

Laser treatments are less invasive and more fuss free, but they destroy the mole tissue and are not suitable for moles that need further evaluation.

Laser treatments are also more effective in removing moles in hard-to-reach areas of the body like the nose and throat. There are 2 types of laser treatments: ablative and non-ablative.

Most of the common moles that we have will not require surgical methods and can be treated with a laser.

This is especially useful because if you are removing your mole for aesthetic reasons, you would want a laser - they generally cause less scarring than surgical methods.

Using ablative lasers - it is important knowledge for both patients and doctors that the Erbium-Yag laser is the gold standard for lesion ablation on the face.

This is because the precision of the 2940nm laser wavelength means lesions like moles can be removed more precisely without injuring other skin layers.

The other popular ablative laser such as the CO2 laser is less selective for water and hence can generate a lot of unwanted necrosis and heat when ablating skin lesions.

I use both CO2 and Er:YAG lasers in the clinic, but moles that need ablation are usually done with the Er:YAG laser.

However, they might not be the first option for treatment of flat (junctional/epidermal) moles, because ablation of these flat moles may result in a scar or dent in the skin (much more likely when not using proper equipment or techniques).

Flat moles can be treated more successfully with various non-ablative lasers without scarring.

A specific technique using a blend of lasers can help remove these moles effectively without scarring in as little as 1-2 visits.

Is it possible to get a mole reduction instead of a removal? 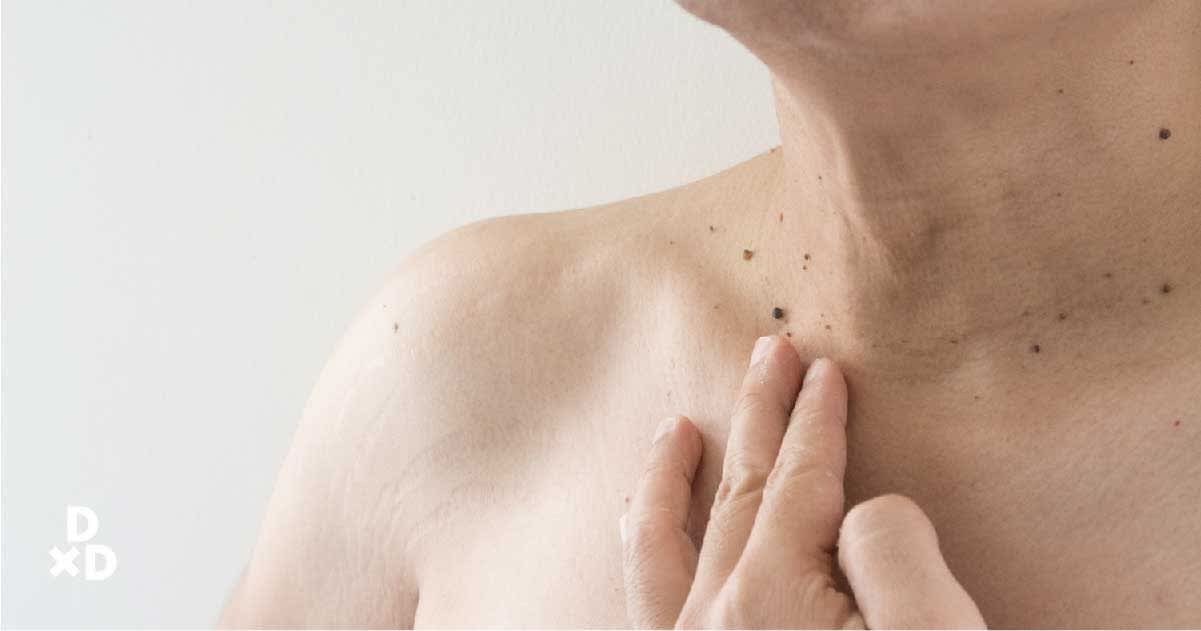 Moles appear when pigmented cells in your skin grow in clumps or clusters. They commonly develop between the ages of 2 to 18 years old and most people have an average of 10 to 40 moles in their lifetime, with some moles appearing or fading over time [1].

Moles are mostly harmless but there is a rare chance that moles become cancerous and develop into melanomas. New moles in adults have a higher likelihood to become cancerous than older moles [2].

Most new moles in Singapore are caused by the sun

I cannot emphasize sun protection to my patients enough - as with most things health-related, prevention is better than cure.

If you don't want a large number of moles and pigment spots on your skin in old age, cover up and apply sunblock. I would recommend using at least an SPF 30 sunscreen. Although there are other causes too, whenever I meet an elderly patient with this situation, his or her history invariably involves a lot of sunlight exposure in younger days.

Lighter skin types are especially prone to sun damage and an increased risk of skin cancers - so for all those Korean-fair Song Joong Ki types, please make even more effort to protect yourself from the sun.

What are the different types of moles? 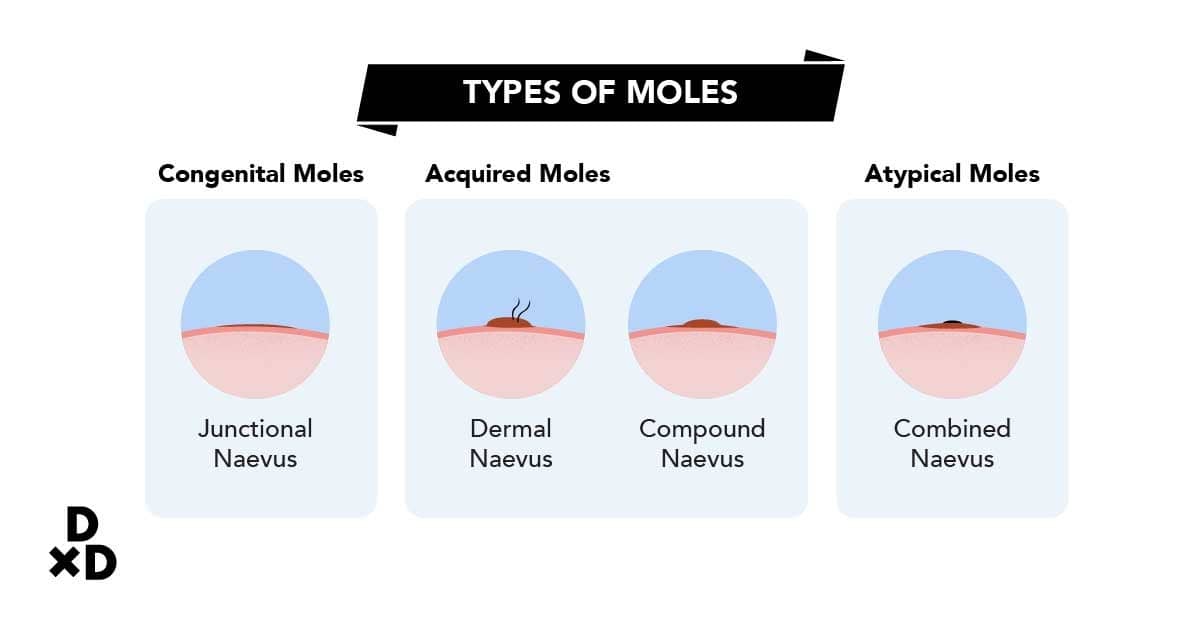 Congenital moles are also known as moles that you are born with. These moles are a common type of birthmark. They can be flat or raised and sometimes have hair growing out of them. As you undergo puberty, the moles may become darker, bumpier and hairier. In rare cases, they disappear entirely.

Small and medium congenital moles seldom become cancerous and do not show any symptoms [3]. However, in some cases, the skin tends to be more fragile and easily irritated, which translates to occasional itching.

Acquired moles are moles that develop later on in life. They develop due to sun damage or genetics, and their appearance can be flat or raised, and range in colour from red to brown to black [4]. These moles can appear anywhere on your body, and most of the time, they do not undergo significant changes in their shape or size.

Sometimes acquired moles darken with age but this does not mean that they are developing into melanomas. Once again, these types of moles rarely become cancerous, even though having more than 50 of them on your body could mean that you are at a higher risk for skin cancer.

Atypical moles have the highest risk of developing into cancer among the 3 different types of moles. Compared to congenital and acquired moles, atypical moles are larger and have misshapen looks since their borders are not well-defined. It is useful to check your body regularly for the development of atypical moles [5].

How to evaluate my moles? 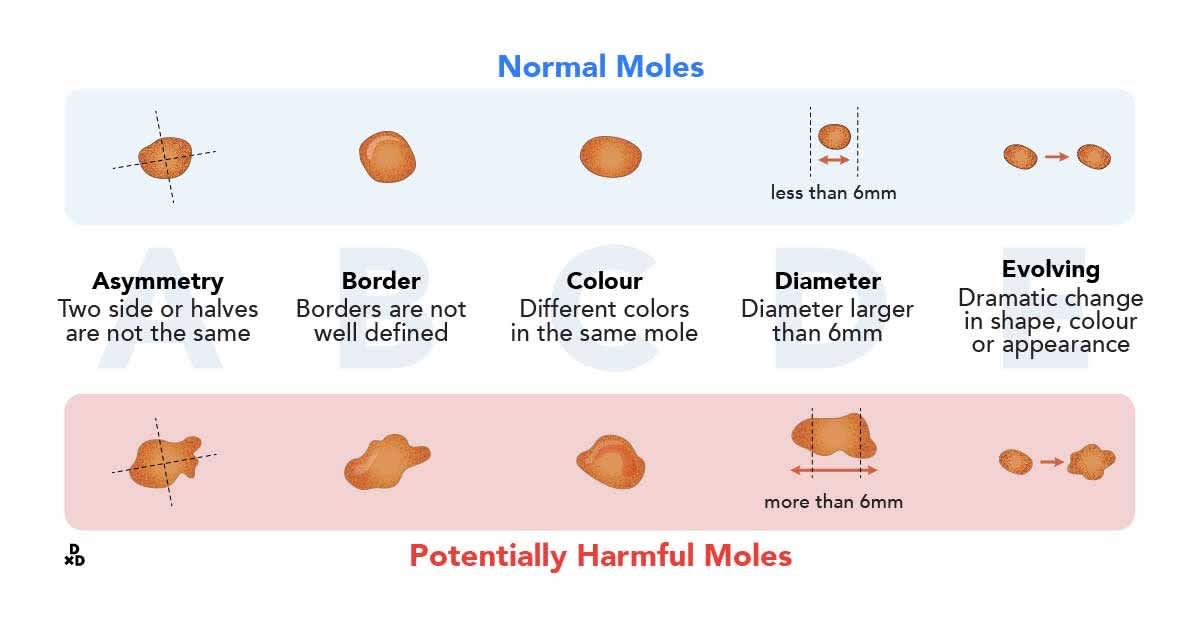 Also known as the ABCDE of moles [6], this is one of the criterias doctors refer to before deciding if a mole requires further evaluation. ABCDE stands for:

So some concerning factors [7] that you should look out for would be:

If any of the above occurs, you should get the mole checked by a doctor or dermatologist. They will do a biopsy to confirm if the mole is cancerous or not.

A tip for evaluating your moles would be to photograph them regularly over a period of time [8].

This allows you to compare and track the changes in your mole and would be especially helpful when you consult your doctor.

It would help us to monitor the changes in your mole and better understand the progression of the mole from the beginning.

How do I know if my moles are dangerous?

A doctor who focuses on skin and aesthetics can usually distinguish a normal mole from a pre-cancerous one.

Skin cancers are rare in Asian skin, especially on the face. Hence, it is commonly acceptable to remove moles in our local context as long as they have been properly evaluated.

However, the only way to be 100% sure that a mole isn't cancerous is to go for a skin biopsy, during which your mole will be cut out and analysed under a microscope.

This is a minor procedure under local anaesthetic.

After the mole is cut out, you'll get between one to three stitches, or a small electric current will be applied to your skin to stop any bleeding.

This takes less than 15 minutes in total, and you'll be walking out the door immediately after.

What are the complicated moles? 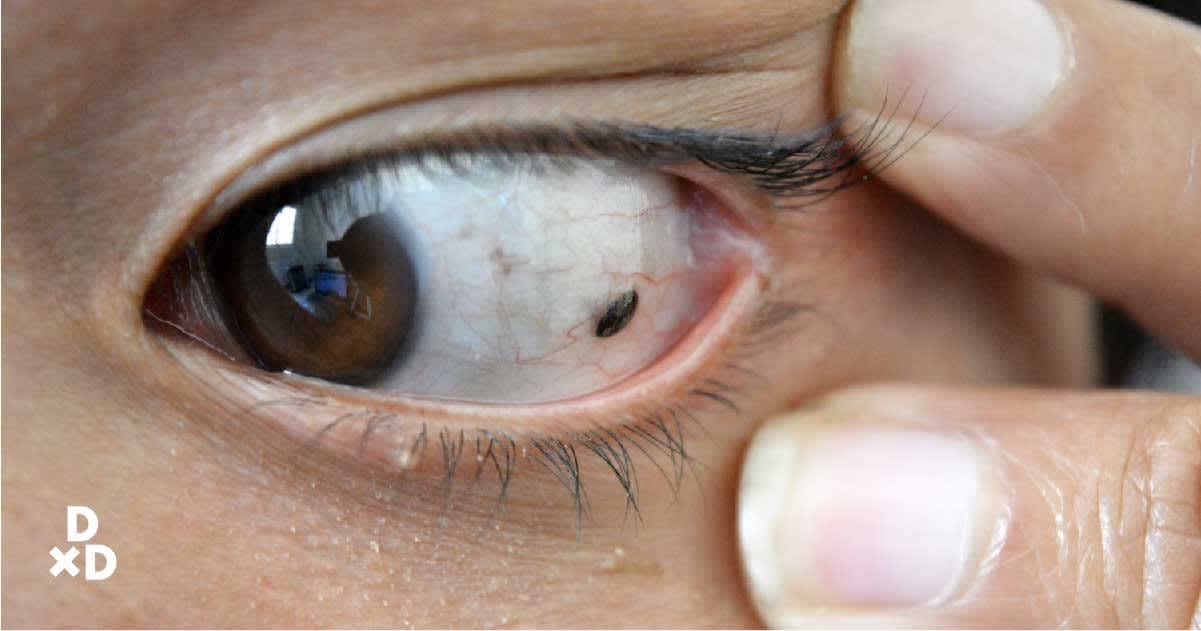 Melanoma is a serious form of skin cancer which can be mistaken as a mole in its early stages. Apart from the skin, Melanoma can also form in the eyes, and very rarely, within the body such as the nose or gut [9].

Ocular melanoma may cause vision changes which can be detected during an eye examination.

On the other hand, melanomas that develop within the body are especially difficult to diagnose since they can be mistaken for other more common conditions.

Read more: What are the signs of melanoma

When should I consider mole removal in Singapore?

A stitch in time saves nine - literally. If your doctor recommends that you have your mole removed, I'd strongly recommend going with his advice. Otherwise, a cancerous mole can result in your doctor performing a wide local excision, which will require many more stitches.

It’s also very common for Asians to remove unwanted moles on the face with lasers for cosmetic purposes.

This is generally acceptable after proper evaluation of the mole since skin cancers are extremely rare in the local population.

The removal is usually achieved in a single session, and there are various lasers that can achieve a good effect.

If you cannot decide whether or not to remove your mole, your doctor might request to take a photograph of your mole for monitoring, before reviewing you again in a couple of months.

I hope you've found reading this article about moles and removing them useful.

if you are worried about any moles yourself, do make an appointment to see your doctor today!

Dr Fan is an aesthetic doctor at Veritas Medical Aesthetics. She graduated from the University of Nottingham in England and worked in various departments in public institutions before entering aesthetic medicine. She takes an interest in addressing aesthetics concerns in a greying population.

The Complete Guide To Seeing A Dermatologist In Singapore (2021)

How Do You Know If Your Mole Is Cancerous? An Experienced Skin Doctor Gives Us The Low-Down

The Ultimate Guide to Skin Cancer in Singapore (2021)

The Complete Guide to Pigmentation Lasers in Singapore (2021)

How do I get rid of a brown line on my toe nail? (photo)

As Dr Paul has explained, the appearance of a brown line on your nail, known as melanonchia, is due to melanin within the nail. It's most often due to non-worrying causes. These include: Moles Freckles Fungal infection Pregnancy Trauma/injury (eg. from nail-biting) Bleeding under the nail Melanonchia due to moles commonly affect the thumbs, index fingers and big toes, like in your case. Of course, as you may have read, the internet will say that the big C word is a possible cause too (melanoma, a particularly aggressive type of skin cancer).

Is mole removal at NSC cheaper than at a private clinic in Singapore?

I think the charges for mole removal in Singapore at private clinics or NSC are pretty comparable. The cost at NSC depends primarily on factors like: Size and location of mole Method of removal (excision vs lasers) The cost for excision removal at NSC starts from $300 – $400 and up, and only requires 1 session. The cost for laser removal at NSC starts from $300 and up, and typically requires a few sessions. Not all moles can be lasered off. As NSC rates are standardised, you may be able to find some private clinics that do it for cheaper.

What is the process for mole removal in Singapore? (photo)

Hello AZ Thank you for your question. You should definitely consult a doctor first to get an accurate diagnosis. There are many different types of moles and it is important to make sure the mole is a benign and harmless one before deciding on removal.

How to remove scar from mole removal?

It is unfortunate that you should scar after the mole removal. Treatment of the resultant scar will depend on the type of scar left after the initial mole removal. Most people who have undergone ablative or burning procedures can be left with a brown or darkened area, known as post-inflammatory hyperpigmentation (PIH). This could be due to a few things, including the excessive heat of the procedure, sun exposure in the few weeks preceding and post-procedure, infections of the wound during the healing phase or poor wound care.

Which type of specialist should I see to perform an excision removal of a mole on my face?