Cancer; the one single word that is enough to incite fear in the hearts of people. A disease so worrying that people go for routine check ups in hopes of discovering the symptoms early and prolong their lifespan. With millions of dollars spent in cancer research only to be one of the few diseases left in the world that currently still has no true cure, cancer is undoubtedly one of the deadliest killers globally.

Although cancer is deadly, it is important to understand what makes it so, and the mechanism by which it affects people and shortens their lifespan drastically. In this article, we will be talking about how metastatic cancer develops and spreads, what makes it deadly, the signs and symptoms, cost of treatment, and prevention methods.

Before we talk about metastasis, we first have to discuss the pathology of cancer. Cancer is the phenomenon where a certain part of the body experiences uncontrolled cell growth. This may be due to a lot of reasons, such as genetics or lifestyle habits, and even the environment we are exposed to. [1] 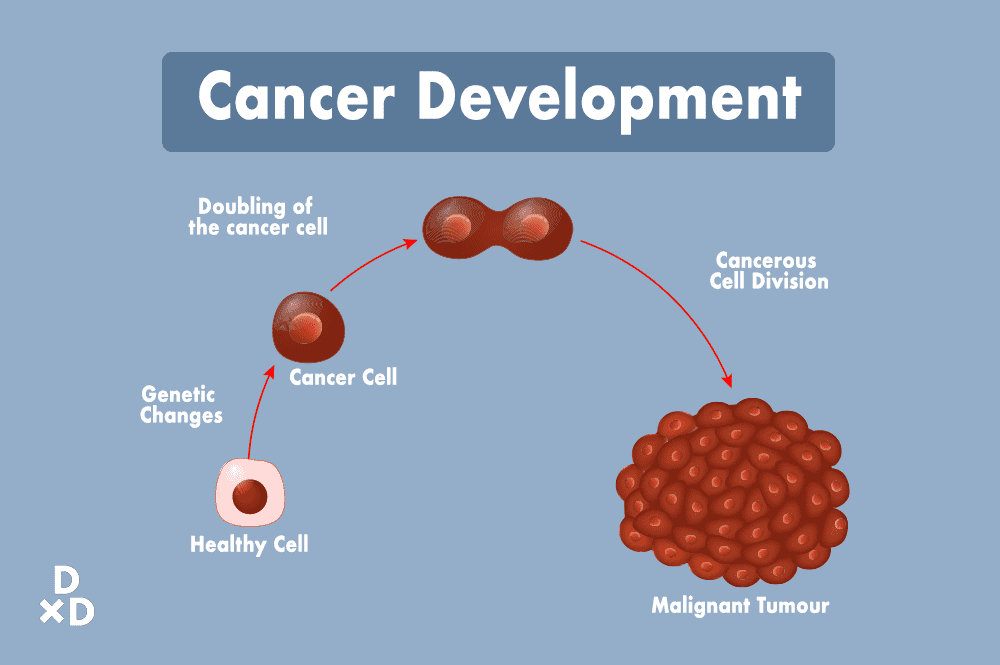 These uncontrolled cell growths will continue to multiply until it manifests symptoms such as a lump, abnormal bleeding, rapid weight loss, amongst many others.

The cell mast that is formed from uncontrolled cell growth is then known as a tumour. These are the base of cancer development and based on their characteristics, will determine the severity of the disease.

Benign tumours are tumours that do not spread to other parts of the body and remain at their original position. These tumours can then be easily excised and are generally non-life-threatening. However, when a tumour is deemed to be malignant, it then becomes a problem.

Malignant tumours are tumours that can invade surrounding tissues and move along the body to various other parts, depositing the cancerous cells there and promoting uncontrolled cell growth in other parts of the body, in other words, it can metastasize. 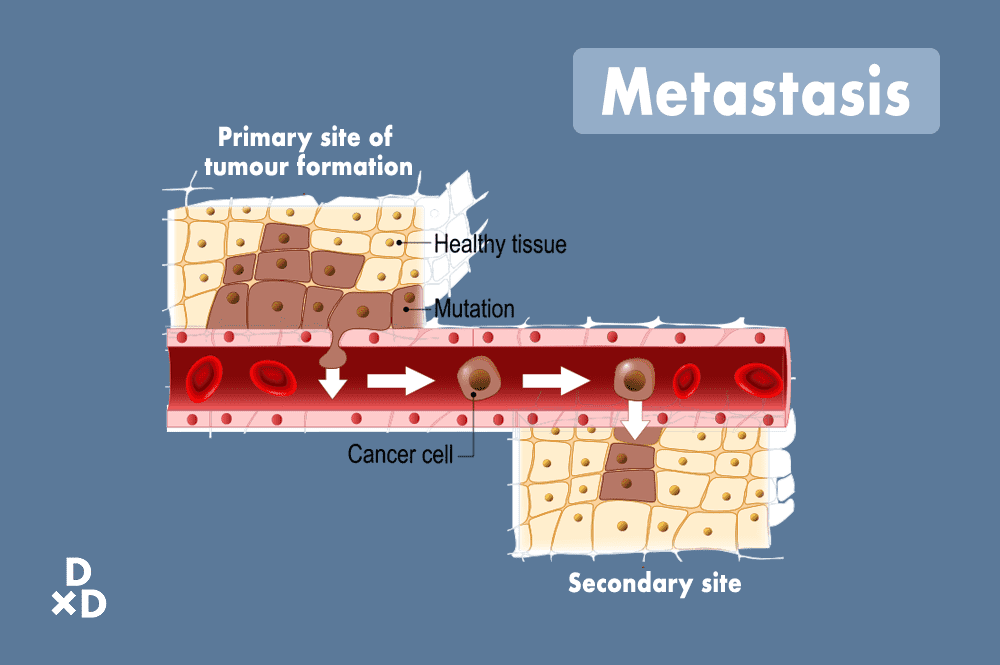 Metastasis is the process where a cancerous tumour spreads from an initial primary site to a different area within the body. This usually happens in malignant tumours where they can both invade surrounding tissues and metastasize to other parts of the body. The spreading of metastatic cancer can occur in any part of the body. This is due to the function where the tumour cells acquire the ability to penetrate the walls of blood vessels and lymphatics, allowing them to move inside the bloodstream and deposit anywhere along the body. [2]

This process is also known as the lymphatic or hematogenous spread, depending on if it travels by the lymphatic system or blood vessels respectively.

After reaching their target site, which can be any part of the body, the tumour cells can then re-penetrate the vessels or lymphatic walls and deposit themselves there. From there, they can then continue to multiply, forming a new tumour which is also known as a metastatic tumour, or secondary tumour. If left untreated, the new metastatic tumour can eventually grow big enough until it can act as a primary tumour as well, causing the spread of more cancerous cells around the body.

Knowing this, it is then easily understandable why metastatic cancer would immediately escalate cancer to Stage IV. At this stage of advanced cancer, the possibilities of curing the cancer are very slim, and can possibly be zero, depending on the severity of the metastatic spread.

What are the symptoms of Metastasis?

Although not all cancers are metastatic in nature, there are some telltale signs and symptoms which may point towards the possibility of cancer turning metastatic. These symptoms, although not exclusively for metastatic cancer, are important to take note of, especially if the individual is suffering from any form of cancer.

The size and location of the metastatic tumours also play a part in the symptoms shown. These common signs include: [3]

Although these symptoms show that cancer has spread to different parts of the body, oftentimes, metastatic cancer does not cause symptoms as well.

As such, the doctor will recommend compulsory regular checkups and scans in order to detect the presence of any spreading and perform various treatments in order to curb the spread before it becomes too late.

How is Metastasis diagnosed?

Unfortunately, there is no single test that can rule out metastasis. To properly diagnose metastatic cancer, it is important to carry out various tests that reveal different things. These tests are generally catered to the type and severity of cancer that the patient is suffering from. The doctor will decide on what tests the patient should undergo and from the results, he/she is then able to analyze and determine the type and severity of metastasis. These tests include: [4]

From the different test results acquired, the doctor can then make a proper diagnosis of the presence of metastasis and the severity of it. As such, patients more often than not find themselves going through many tests as there is no single test to help rule out the possibility of metastasis.

How is Metastasis treated?

The moment cancer has metastasized to another organ or tissue, it greatly decreases the chances of survival. 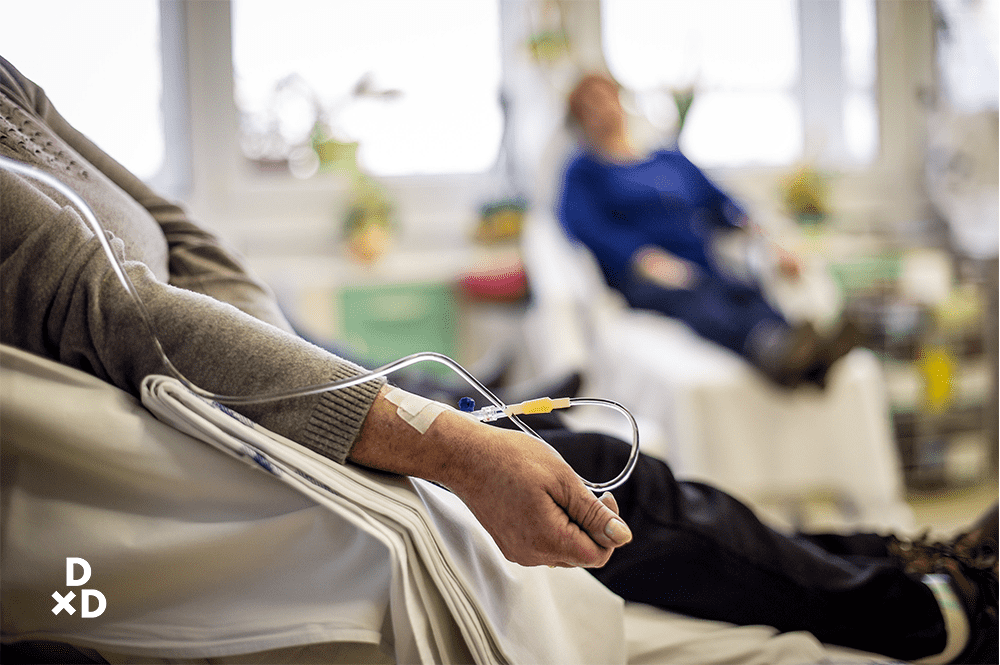 Hence, there is no treatment to fully cure metastasis, but rather only to help prolong the lifespan of the individual. The targeted treatment for the metastasized cancer will still be towards primary cancer, as the type of cancer itself has not changed, but merely spread to a different part of the body. [5]

More often than not, the doctor will suggest having more than one treatment at a time, as a single type of treatment would be insufficient to remove the rapidly spreading cancer. As such, surgery, coupled with other forms of therapy would be recommended — surgery would help remove the bulk of the cancerous growth, whereas therapy can work on removing the rest.

It is important to note that although going through multiple treatment types is more effective, the main aim in treating a patient with metastatic cancer is to prolong their remaining lifespan.

As such, palliative care is also used to help optimize the quality of life and help mitigate the suffering patients have to go through.

Throughout the years of study, it has been reported that cancer is random and can happen to anyone. Of course, there are factors that increase the chances of getting the disease such as genetics, excessive smoking, or bad lifestyle habits, but from time to time, patients reportedly living healthy lives can also suddenly suffer from the disease.

Hence, there is no proper set of rules to follow to help prevent cancer fully. Living a healthy lifestyle and practicing good habits will decrease the chances of getting cancer but does not fully eliminate the chances.

However, when it comes to the prevention of metastatic cancers, there are therapies that are specially made for them. Neoadjuvant therapy is a form of therapy that focuses on the prevention of metastatic cancer instead of treating it after it metastasizes. [6] The goal of neoadjuvant therapy is to shrink the primary tumour through various methods such as radiation therapy, chemotherapy, and hormone therapy, so as to prevent the tumour cells from forming metastatic tumours later on.

The treatment for metastatic cancer fluctuates a lot and is mainly determined by the type and number of treatments that an individual has to go through. These include the different tests to help diagnose the condition, as well as the different therapies that are ordered by the doctor.

Furthermore, different types of cancer have different costs, coming in the form of biopsies, surgeries, and different therapy types with different public and private hospitals having different rates.

As cancer is a lifelong disease, therapies tend to last for months, sometimes even years, with the patient having to go for routine testing in between so the doctor can have an update on his/her condition.

Cancer not only affects the patient but can take a toll on his/her loved ones as well, much less metastatic cancers. As such, it is important to live a healthy lifestyle and develop good habits to lower the chances of getting this deadly disease.

It is also paramount that everyone who is at risk for specific cancer types goes for routine checkups and screening to ensure that if cancer is detected, it can be nipped in the bud early before spreading into dire conditions. Do you or your loved ones fall into the risk category of cancer? If yes, don’t hesitate, book a screening test with your nearest doctor now.