Do you have Joint Pain (osteoarthritis)? Japanese White Turmeric can help reduce inflammation and pain with minimal side effects.

Studies have shown that around 70% of osteoarthritis participants had significant and/or good improvement when taking Japanese White Turmeric.

While there have been no side effects reported, and the supplement can be taken with other medication, even with one not related to osteoarthritis treatment. How does this turmeric work? Why should you trust the results? Read on to find out!

How does Japanese White Turmeric differ from other Turmeric?

There are many different types of turmeric found around the world. The one you are most likely familiar with is Curcuma Longa, which is yellow in colour and commonly found in Indian cuisine and as supplements.

Japanese White Turmeric is also of the variety Curcuma Longa, but with a major difference. Most Curcuma Longa contains a compound called Curcumin.

While Curcumin has some effect on arthritis [1], it is not nearly as effective as the Labdane-type diterpenes in Japanese White Turmeric in treating osteoarthritis (OA) [2]. 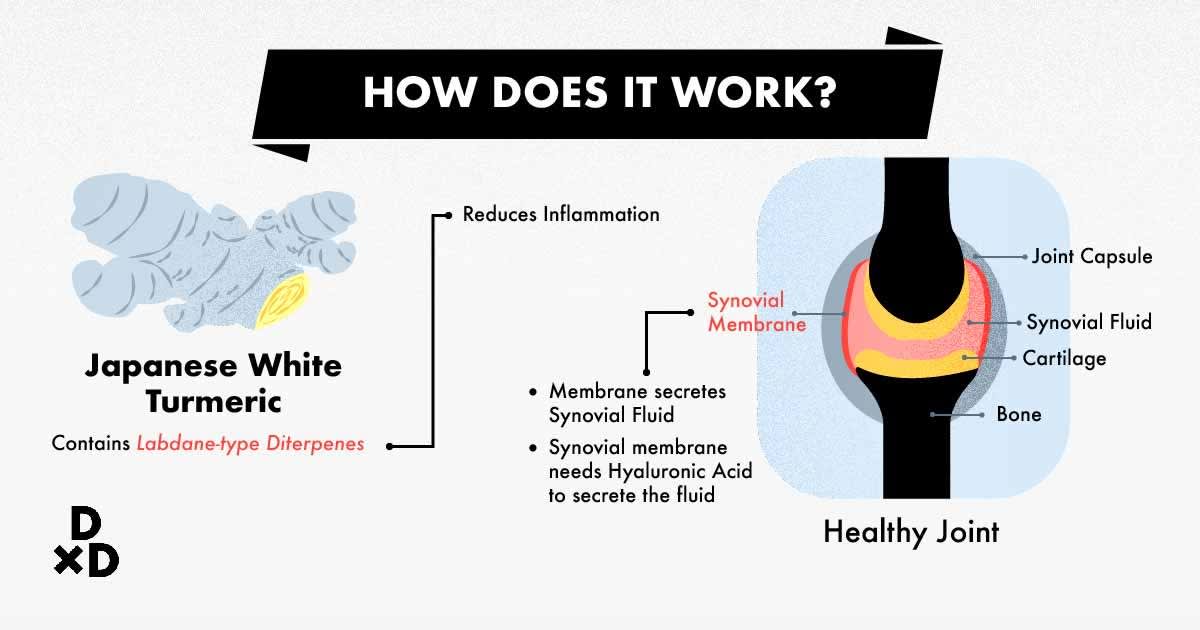 How does Japanese White Turmeric work?

This is in contrast to their small amounts of Curcumin. Labdane, found in the root, has the ability to strongly reduce inflammation which occurs in the joint capsule.

Why is this significant?

To understand why preventing inflammation is so important to the body, you have to understand how the joint works. At each joint is something called cartilage that cushions your joints.

This cartilage is the most important structure in maintaining smooth, complex movements of your joints.

Cartilage does not have any nerves, blood vessels, or lymphatic vessels leading into it, but is nourished by the synovial fluid surrounding the joint.

As you age and go about life, this cartilage wears out and becomes damaged. This deforms the surrounding bone structure and causes inflammation which thickens the synovial membrane that wraps around the bone.

This inflamed membrane secretes excessive fluids that expand the joint capsule, the ‘bag’ encapsulating the joint, and inflammation promoters lead to the cartilage and bone degrading [3].

Labdanes were tested and scientists found that they could control inflammation in the synovial membrane. This eventually leads to a better cartilage condition.

This finding led to further research in two locations in Japan which showed that Labdanes could help improve osteoarthritis in humans.

At the time of writing, Turmeron Joint is the only supplement that tackles primary inflammation, with the patent on it saying that it is an ‘inhibition agent of synovial membrane growth’. 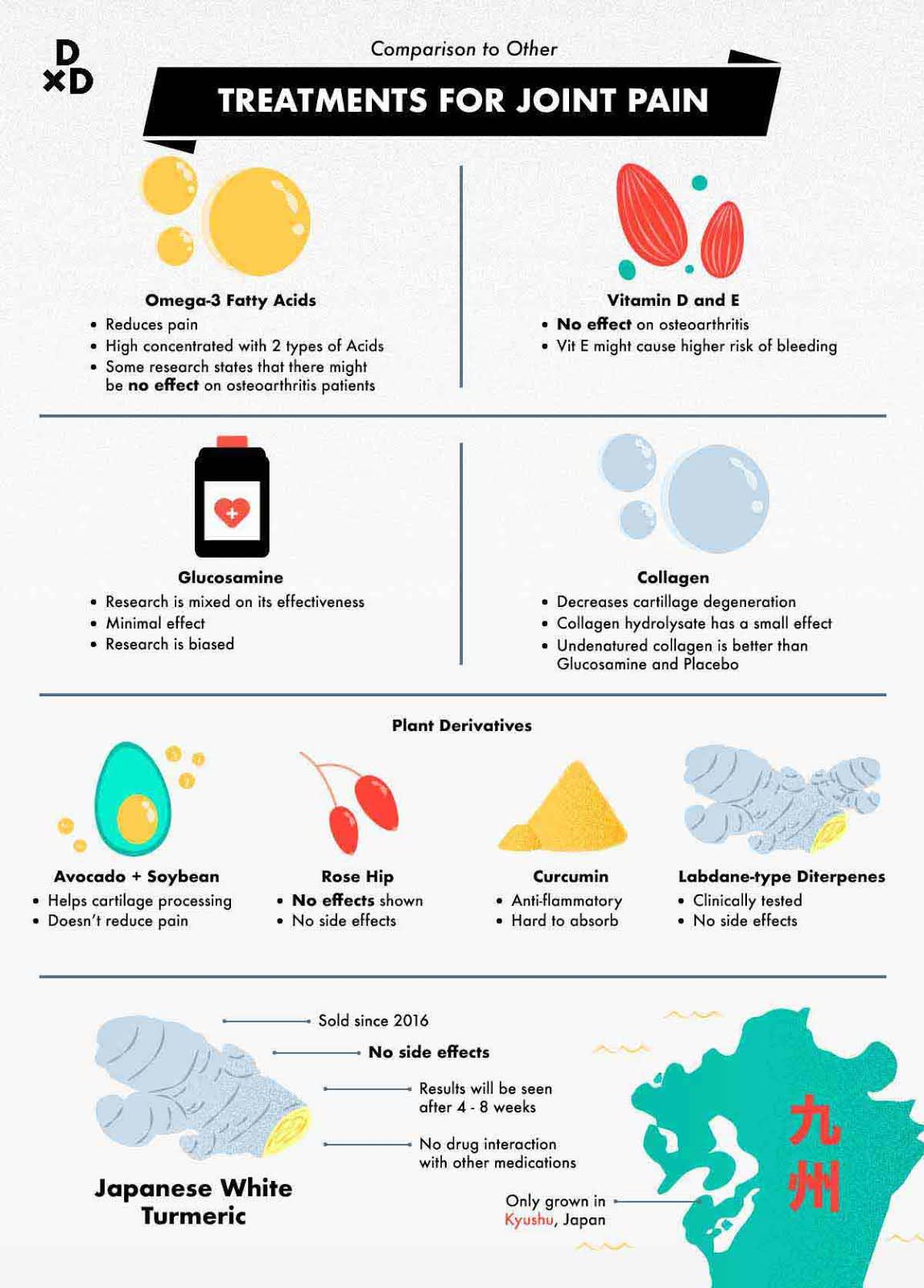 How does Japanese White Turmeric compare to other Supplements for Joint pain?

Because of the high concentration of 2 different types of acids, Omega-3 Fatty Acids is thought to be able to reduce pain.

However, present evidence suggests that there is no effect on osteoarthritis, and evidence is of low quality. This includes fish oil, krill oil, and GLM extracts [4].

An analysis of current studies found that Vitamin D and E had no effect on osteoarthritis treatment. The evidence was a mix of both low and moderate quality, so further study will have to be done to give a definite conclusion.

Vitamin E supplementation is associated with a higher risk of bleeding, so do be careful if you are taking blood-thinning medications [5]!

A natural amino sugar produced by your body, there is a high concentration of Glucosamine in your joints and cartilage. Glucosamine is normally taken with Chondroitin when taken as a supplement.

Research is mixed on its effectiveness, even after several studies with hundreds of participants [6]. The effect size is small, probably not clinically significant, and maybe biased.

A protein found in your body, supposedly consuming collagen as a supplement will help in decreasing cartilage degeneration. There are several different types of Collagen, the two more common ones being collagen hydrolysate and undenatured collagen.

What research has been done on Japanese White Turmeric?

The initial trials to test the efficacy and safety of Labdanes were done first in-house with 60 patients. After this at Sodegaura hospital, further tests were done with 30 patients [12].

In both cases, patients had osteoarthritis on the knees, which carry a large amount of the body’s weight. Patients were given 3.2mg of Labdane in 2 capsules and their pain measured on a scale called the Visual Analogue Scale (VAS), which is based on a rating between 0-10.

As these results were statistically significant, it meant that the drop in pain was likely because of the Labdane rather than by chance. This led to patients experiencing pain-free knees after treatment.

Also read: The Ultimate Guide to Supplements for Joint Health in Singapore (2021)

What Further research on Japanese White Turmeric is being done?

There is a double-blind placebo-controlled randomized clinical trial that is being planned in Tokyo with Japanese patients.

However, more significantly, a Double-Blind Placebo-Controlled Randomized Clinical Trial has been arranged with Dr Kaj Winther of Denmark, which is being carried out between October 2019 and July 2020.

A Double-Blind Placebo-Controlled Randomized Control Trial is important because it is commonly held as the best type of experiment that gives us good evidence of cause and effect.

If the study is successful, we can be more sure that Japanese White Turmeric and its Labdane-type Diterpenes has a significant effect on pain reduction. You can find more about Dr Winther in this reference [14].

Where can I get Japanese White Turmeric?

Japanese White Turmeric is currently only grown in Kyushu, Japan. As there is a patent on the plant and its medicinal properties, only Turmeron Joint and its allied companies can sell it as a supplement.

Japanese White Turmeric is only grown between March and November and only harvested once a year. Once harvested, the plant is dried, the active ingredient is extracted and turned into a capsule for your consumption via GMP and FDA certified factory.

Also read: Your Complete Guide to Food Supplements in Singapore (2021)

With over 17 years in developments, Japanese White Turmeric is a promising supplement compared to other alternatives found on the market.

It is clinically approved for osteoarthritis and you have little to lose in trying out this supplement before taking more extensive treatments.

To start you off on the wonderful benefits of Japanese White Turmeric, here is a free bottle of Turmeron Joint that contains the unique, Japanese patented White Turmeric.

Dr Henry Chan is an orthopaedic surgeon practising at Mount Elizabeth Hospital. Dr Chan specialises in the management of adult and child fractures and trauma, general orthopaedic injuries, sports injuries of the ligament and meniscus, and degenerative spine conditions including prolapsed intervertebral discs (slipped discs). In his free time, he enjoys singing karaoke.

A Surgeon's Guide To Back Pain Treatments In Singapore That Work

Everything You Need To Know About Knee Replacements In Singapore (2021)

The Complete Guide to Seeing An Orthopaedic Surgeon in Singapore (2021)

The Ultimate Guide to Supplements for Joint Health in Singapore (2021)

How can I tell if a swollen finger joint after trauma is due to a fracture?

Thank you for your email, and sorry to hear about your injury. Pinkies are very often injured in ball games. Besides being swollen and painful, is there a deformity? Or you are unable to extend the finger tip straight like before? There can be several common injuries, including a fracture. Another common injury is a mallet finger - either a soft tissue mallet, or a bony mallet injry where there is a little avulsion fracture. My advice is to see an orthopaedic surgeron, and get an X-ray done. That is the sure way to exclude a fracture.

What should I do next if my wrist has not recovered completely after a fall?

What are some measures to prevent arthritis after a joint injury?

Can certain dietary intake, such as omega-3 fatty acids, increase the risk of prostate cancer?