I think it’s high time I spoke up for my specialty and discipline. I've been mistaken for an Orthodontist wayyy too many times. 🙄

I love my Orthodontist friends, but I need to tell the world that other specialities in Dentistry exist as well!!

Orthodontists are dentists that specialise in braces to align teeth, while we Periodontists specialise in treating gum disease. We're a fairly rare specimen in Singapore, but the numbers are growing.

What's in a name?

My friends can never remember the name of my specialty, but in essence, Periodontists are people who treat diseases AROUND the teeth. Peri = around Odont = tooth. Geddit? 💡

It’s kinda strange, but in general, Periodontists tend to be very soft-spoken, sweet, and introverted because we do a lot of “background’ work in Dentistry. The introverts tend to feel this “calling" to become a Periodontist (aka unsung heroes).

I like to think I'm soft spoken and sweet, *ahem* but the truth is that I'm probably one of the loudest Periodontists in Singapore, JB and some say Batam. 😂 Just ask my kids. 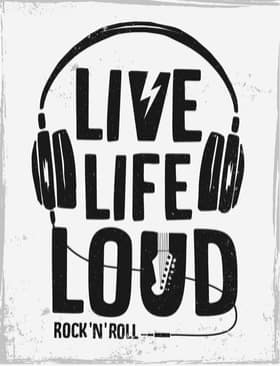 Periodontists are also called gum gardeners in the industry as we tend to the soil that supports the teeth. Not very glamorous, but we do the background work to ensure that you've got good bone and gums to anchor your teeth.

Just a decade or two ago, the layperson generally assumed that as you age, your teeth start to wobble and fall out, and one is destined to wear dentures. #sonottrue.

Now the current scientific thinking is that you CAN and you SHOULD retain your natural teeth. Periodontists are trained to help you achieve just that goal. 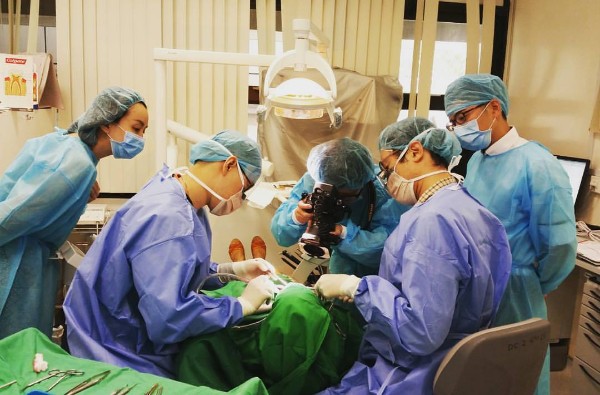 Dental implants should ONLY be used to replace missing teeth that are lost to severe gum disease, or cannot be salvaged for some other reason.

They should NOT be used as an alternative to a tooth that can still be kept through other dental techniques!

Keeping your gums healthy - all in a day's work!

As mentioned above, we Periodontists treat gum disease, which comprises two major forms: Gingivitis and Periodontitis.

The major cause of gum disease is bacterial plaque, a sticky white film composed of food debris and bacteria that forms on the teeth.

For Gingivitis, there's no bone loss, and the gums just exhibit signs of inflammation like bleeding and swelling.

However, when Gingivitis is left untreated, it may progress to Periodontitis.

The above process causes shaky teeth, which may eventually fall out. Bad breath also ensues from the build-up of bacteria in the gums.

So please, do seek help early if you think that you might have gum disease! You can take this quiz to find out whether you do.

As a yoga teacher (I moonlight as one sometimes to supplement my income 😂), I can also highly recommend yoga to help boost your immunity so you become less susceptible to gum disease. 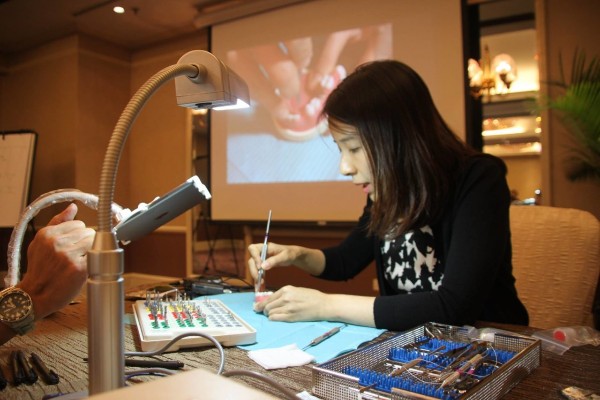 So there you go, this is my job scope and what I do as a Periodontist day after day.

Our job may be pretty dirty, 'cos we are cleaning out dirt from your gums everyday. But it's also super rewarding when you see the tartar pop out from the gums, like blackheads being removed while you are doing a facial. 😑

Besides gunning for world peace, I want to tell the world that your teeth can be saved by proper brushing and flossing habits while leading a healthy lifestyle to boost immunity. Here's to more information to saving teeth! 🥂

Dr Marlene Teo is a Periodontist (gum specialist) at TP Dental. She holds a joint appointment as Adjunct Senior Lecturer at the National University of Singapore. Dr Teo passionately believes in leading a holistic and healthy lifestyle to boost immunity and combat periodontal disease.

Quiz: Why Do Your Gums Bleed?

Your Guide To Choosing the Right Dental Surgeon in Singapore (2021)

The Ultimate Guide to Seeing a Periodontist in Singapore (2021)

7 Early Symptoms of Dental Problems in the Elderly

Can I have dental implants if I have gum disease?

Dental implants can also be affected by gum disease (peri-implant mucositis or peri-implantitis), similar to how natural teeth can develop gingivitis (reversible inflammation of the gums) or periodontitis (inflammation of the gums and loss of supporting bone). Should you have been successfully treated for periodontitis AND successfully maintained for a period of time (to demonstrate stability), then you can consider dental implants.

How do you get rid of a keloid scar from acne?

Hi, Keloid scars are a result of overgrowth of granulation tissue that has grown beyond its boundaries of the original wound. In comparison to a hypertrophic scar which are raised but has NOT grown beyond the boundaries of the original wound. Treatment for both varies depending on severity and duration. Combination of steroids and laser may help and recently studies have shown the involvement of using botox can also aid in the symptoms. I would avoid things like radiotherapy and topical chemotherapy agents.

Do I need a dental implant after extracting my second molar?

Hi there, The need to replace a second molar depends on the bite and the neighbouring teeth. Basically, if there are teeth around it then replacement would be ideal to to prevent the movement of the neighbouring teeth. Teeth tend to drift into a space if it is present. If the opposing second molar in the other jaw is present, the lack of an opposing second molar would result in an overgrowth of the that tooth as it has no partner to bite on. This will not happen slowly, it happens over the next couple of years.

Which treatment, a root canal or a dental implant, is more time-flexible and will result in less bone loss after tooth extraction?

Tooth extraction will always cause bone loss in the extraction site. When a tooth is removed, functional forces cannot be transmitted to the bone supporting that tooth. Bone loss occurs to conserve resources (to build and maintain bone at the same volume). This is a physiological (natural) phenomenon that keeps our bodies functioning efficiently. There are techniques to reduce (but not prevent) bone loss (bone grafting) at the time of extraction. Bone grafting using artificial bone does not produce the same volume of native (a continuation of the patient's own jawbone) bone.

Are cortisone shots, tretinoin and patience the only way to get rid of nodular acne and improve skincare? (photo)

Nodulocystic acne can be a very frustrating problem, especially if it recurrent, as it presents with painful, red nodules on the face. Intralesional steroid injection is a 'quick fix' for nodular cystic acne as this helps to settle down the inflammation quickly and reduce the size of the cysts and the improvement can be seen within days of the injection. As nodulocystic acne can often be recurrent, oral systemic treatment with antibiotics or oral isotretinoin is often needed to control the cystic acne and prevent the recurrence of the acne.