At the start of March 2018, we saw a sudden increase in the number of Hand, Foot and Mouth Disease cases. This caused a lot of unrest in the parenting community since it is a common pediatric condition which affects children below the age of 5.

Hand, Foot & Mouth Disease (HFMD) is a contagious viral infection common in children under the age of 5. HFMD is a minor illness that may cause some pain and discomfort but is usually not life-threatening.

After a few days, more symptoms would appear. This includes: 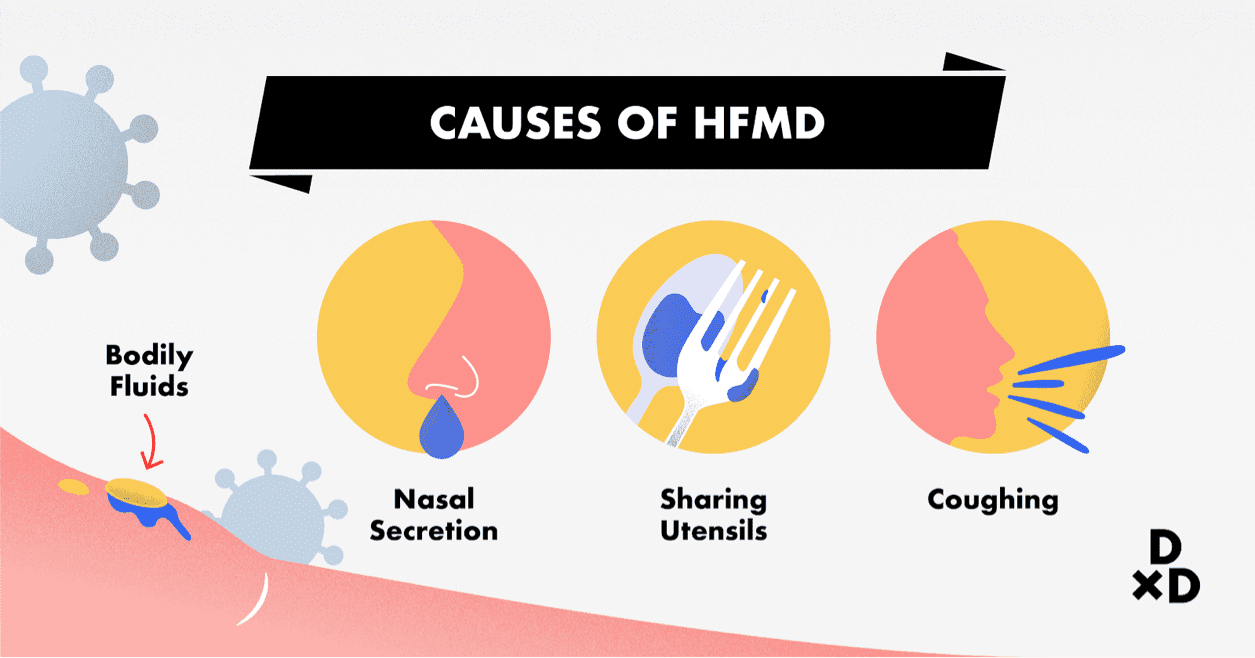 As with all viral infections, HFMD is caused by viruses - commonly coxsackievirus or sometimes other enteroviruses. The illness spreads when the virus is transferred via person-to-person contact, between a healthy person and an infected person.

Transmission of the disease typically occurs through the fluids of the infected person. They can come in different forms of bodily fluids such as nasal secretion, saliva, fluids from blisters and stool.

Interactions with such fluids through close contacts like sharing utensils, coming into contact with stool when changing diapers or even coughing and sneezing can result in the virus spreading.

HFMD is especially prevalent in children due to the child care setting they are in.

Potty training and diaper-changing exposes children to the substances which carry the virus.

On top of that, children tend to put their hands and feet in their mouth, making them ingest the virus, further increasing the risks of them contracting the virus.

“Would popping the blisters make them heal faster?”

If you are thinking about popping the blisters on your hands and feet, don’t do it.

Popping the blisters would release the pus, which contains the virus, increasing the risk of infecting others.

To take care of your blisters, keep your hands and feet clean and the blisters uncovered. Wash the blisters with soap and lukewarm water, and gently pat on them to dry them.

In the event that you accidentally pop a blister, immediately wipe or wash the pus away to prevent any risk of infecting others.

Put on some antibiotic ointment to guard against infections and cover it with a plaster [2]. 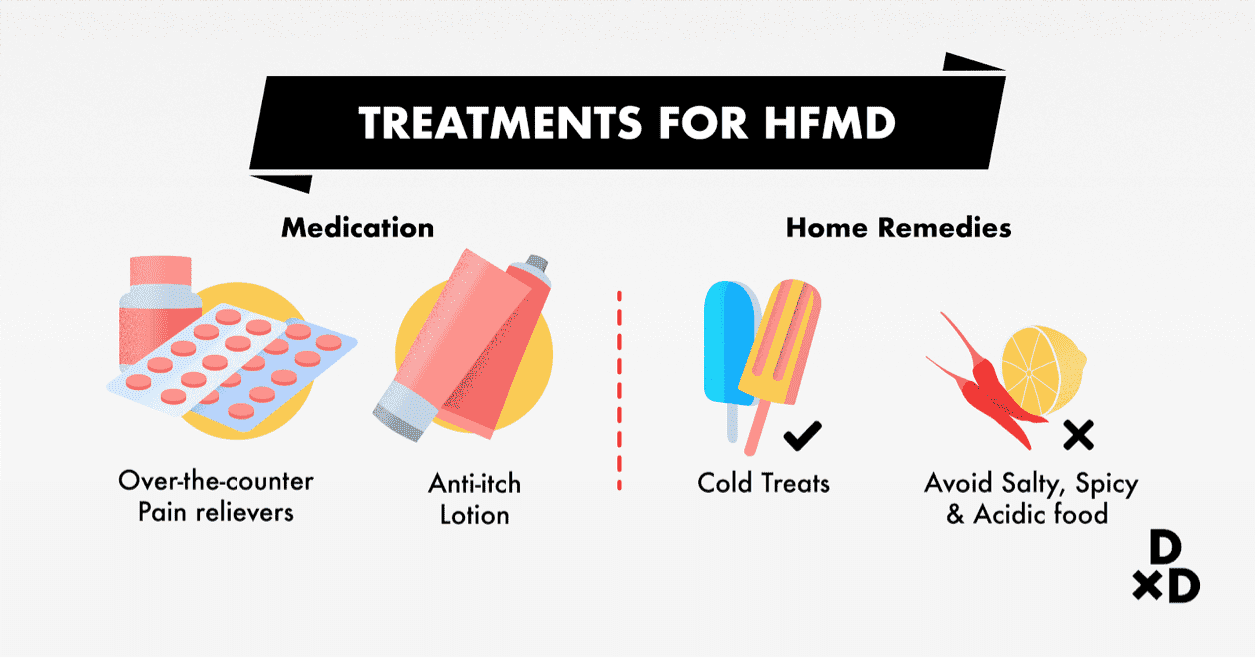 There is no specific treatment or vaccines for HFMD.

Since it is a viral infection, antibiotics will not work against it and we can only rely on the immune system of the child to combat the virus.

As mentioned previously, HFMD is a mild illness with mild symptoms, and a child can recover within a week or so.

HFMD can make eating and drinking painful since swallowing would affect the blisters in their mouth.

However, it is important for them to be well-hydrated and nourished so that they can fight off the virus. Luckily, there are a number of ways in which you can help your child feel better.

If you are worried about giving your child medication at such a young age, you may want to consider some home remedies to provide them with some relief. Some easy home remedies include:

These remedies would help to soothe the pain and inflammation of the mouth and throat sores caused by HFMD [3]. 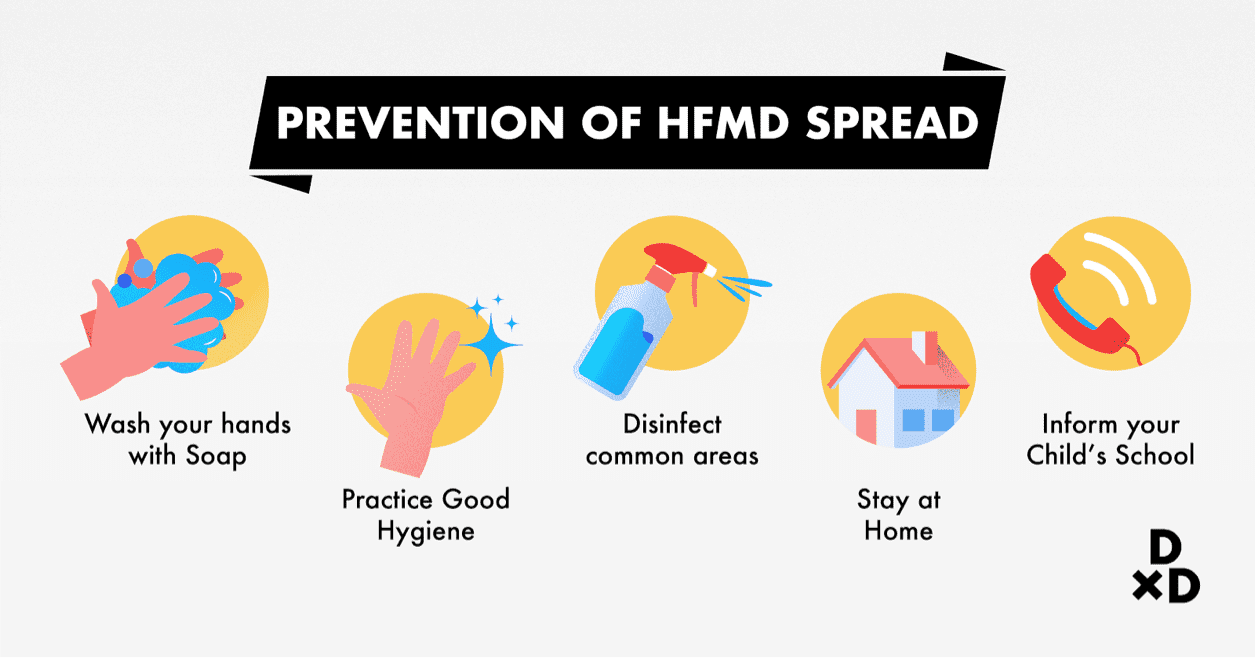 As mentioned above, HFMD does not have a cure or vaccine currently.

HFMD is most contagious in the first week of the illness, but they can remain contagious for weeks after symptoms have totally left the individual.

So the best way to go about dealing with HFMD would be to avoid contracting it through preventive measures [4].

While HFMD is a mild condition, there are rare cases where it can lead to complications due to neglect or inappropriate handling of the illness. Some of these complications include:

If you are pregnant and suspect that you are carrying the disease, please consult your doctor immediately.

Pregnant women who contract HFMD may develop complications which are more severe than a normal adult.

Complications of HFMD in pregnant women includes miscarriage, stillborn and possibly multiorgan failure in newborns for mothers who were infected close to their delivery [8] [9].

What’s the difference between HFMD and Chickenpox?

The appearance of similar symptoms like fever and formation of blisters can cause confusion between Chickenpox and HFMD.

The most obvious clue to differentiate the two would be where the rashes first developed.

Chickenpox rashes usually develop from the torso and spread outwards in 7 to 10 days while HFMD rashes develop mainly on the hands, feet and mouth.

Another telltale sign is that HFMD blisters tend to be yellow or red in colour while Chickenpox blisters are usually clear.

Finally, HFMD blisters tend to be more painful than Chickenpox blisters which tend to be itchier [10].

Is HFMD the same as Foot-and-Mouth Disease?

Although these diseases sound similar, they are vastly different and should not be mistaken for each other.

Foot-and-Mouth Disease (FMD) is sometimes known as “hoof-and-mouth disease” and only affects cattle, sheep and swine.

HFMD is not a life-threatening condition but if not handled properly, it can lead to a lot of complications which may, in turn, become a danger to you and those you love. If you are unsure about how to approach HFMD, it is best to visit your doctor to get the appropriate remedies before it worsens.